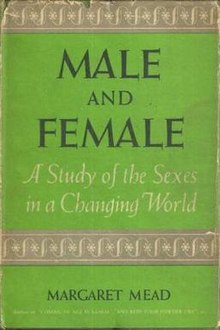 This book is a comparative study of the roles played by tribal men and women in seven pacific island societies and that in contemporary United States. Margaret Mead explored the formation of gender roles among human beings . The book is basically divided into four parts or sections. In part 1 , just like in any other ethnographic report or dissertation Mead described the nature of her questions, methods she used during her study and her observation of the people. In part 2 , she utilised Freudian theory which credits processes like ssuckling, weaning and controlling excretion of bodily fluids; which represents adult character. She evaluated the process by which individuals define the gender identity.In part 3 she observed and investigated the biological characters of men and women and how it balances the need of the society. In part 4 , she analyses all her findings.

Mead had for the first time involved psychoanalytic theory in understanding the importance and pertinence of childhood experience to adulthood. In this book she also managed to glorify child bearing capability of women, she wrote “If women are to be restless and questing, even in the face of child-bearing..”

Mead in a vivid, frank way offered how the gifts of women can be used in the Western civilization just like that of men and in doing so make better use of all human resource.

This book was really wonderful to read and I suppose we can apply her ideas even in the 21st century.