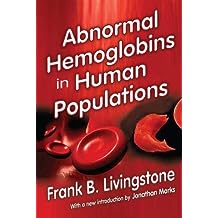 I am very excited for this review today as it is one of my personal favorite. Now , moving on to the book which is a very important compilation and explanation of abnormal hemoglobin and G6PD deficiency throughout the world. In the beginning of the book a brief outline of biochemistry and genetic traits inheritance. The next part consists of theorems of population genetics and is later followed by knowledge of red cells of the time. The writer then attempts to apply the general theorems of distribution of traits to people of different geographical area .This is then followed by a bibliography and appendix.

Professor Livingstone tries to interpret the  selection by Malaria and few problems which arise due to malarial hypothesis to account for frequency and distribution of traits.He found after several attempts that resistance to malaria is available only for sickle cell  trait. He also uses computer models of gene frequency changes through time to help in his experimentation.During the 20th century a discussion of population genetics, with its ubiquitous mathematics , was a total new way to present data. There are lots of examples along with theories in the book, which means that Livingstone has gone through years of experimentation in the theoretical and real sense of mathematics. Although population genetics now-a-days is a heavily grandiose branch in its own sense with lots of high technology which are used to interpret data, in those days, it was a great to simply use computational mathematics and science together for the real world.

There is a minor issue though , G6PD did not get a thorough discussion. But the biting and breeding factors of mosquitoes which cause malaria have been discussed in a detailed manner in chapters which concerns with Africa and East Asia.  The author also did not discuss in details the genetic traits of the population who have migrated to America from the older continents. The overall conclusion was related to malarial hypothesis which helped Professor Livingstone in determining the genetic traits and frequency.

Even though there were a few criticisms of his book, yet it was highly appreciated in those days and even now, it is considered a brilliant work of science.